What do a child molester, murderer and predator have in common?

Democratic Rep David Cicilline, according to House Republicans who this week released a TV ad in Rhode Island linking them.

The ad refers to the freshman’s time as a lawyer two decades ago when he defended hardened criminals and is designed to boost GOP hopeful Brendan Doherty.

Still from the advert linking David Cicilline with child molesters

Formerly the head of the state police, Doherty is making his first run for office.

The ad echoes an attack at Doherty’s own campaign launched last week that shows a photo of Cicilline on-screen alongside the words ‘rapists, pedophiles and murderers.’

Nationally, Democrats are not expected to win back control of the House in Tuesday’s elections. But Cicilline’s seat in tiny, liberal-leaning Rhode Island would be a victory for Republicans, who haven’t won a House seat representing the state since 1992.

The GOP sees this year as their best shot since then, and both national parties have poured hundreds of thousands of dollars into TV ads in the final week of the race. 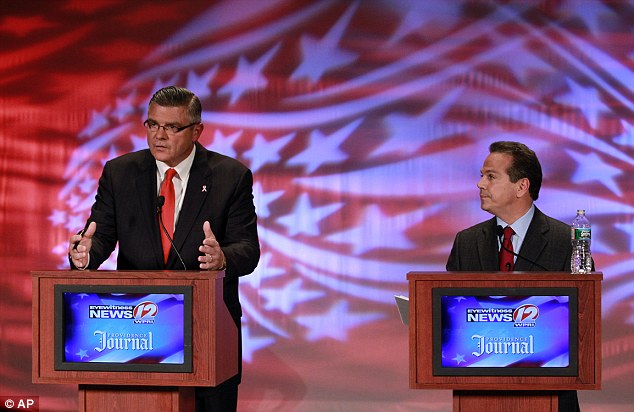 The NRCC ad is ‘one of the harshest ads I’ve ever seen in Rhode Island politics,’ said former Democratic congressman Bob Weygand.

He said defense attorneys don’t necessarily like their clients, but their job is to defend them, and that shouldn’t reflect on them personally.

The Cicilline campaign put out an ad Wednesday focusing on the Republican ads and saying Doherty ‘doesn’t want to talk about his agenda.’

Asked about the fairness of an ad attacking an attorney for defending those charged with crimes, NRCC spokesman Nat Sillin criticized Cicilline for choosing to ‘fight for violent criminals’ over victims.

‘David Cicilline chose to represent convicted child molesters and murders. He chose to make a career out of doing that,’ he said.

It is ‘one of the harshest ads I’ve ever seen in Rhode Island politics,’ former Democratic congressman Bob Weygand told the Washington Post, adding that Cicilline’s job shouldn’t reflect on him personally.

The cryptocurrency community is in a tizzy this weekend after the founder of Twitter, Jack Dorsey, tweeted about a new application that allows people to

The ‘Father of Capitalism’ Adam Smith’s grave has been included in Edinburgh City Council’s ‘ludicrously biased’ dossier of sites linked to slavery and colonialism. The Scottish

Why data gravity won’t stop the move to multicloud

Join Transform 2021 for the most important themes in enterprise AI & Data. Learn more. You’ve probably heard of “data gravity” and how it can

Truth be told, leggings in the spring and summer can be tricky. Your black and grey ones have probably been glued to your body for

Millions of items are lost, damaged or stolen during home moves: Here’s how to keep your stuff safe

Home movers have had four million of their possessions either lost, damaged or stolen in transit over the past 12 months. Nearly a quarter of